Not too much to describe here. The buffer beam is made from 1 1/2″ x 3/16″ BMS flat and cut to be 8″ wide and machined down to 1 15/32″ wide. The chamfer is cut and then all the holes drilled. I used the mill and DRO to set out the holes centres drilling first with a centre drill and followed by the required size. The drawing has the holes in metric except for the buffer stop which is still “ream 7/16″ ” so I just converterd them back to number sizes for the BA screws that were eventually going to be used. The draw bar rectangle can be drilled with two 3/16″ holes and then filed out to the finished rectangle. With all the holes drilled the fixing holes for the angles connecting to the frames were countersunk for 5 BA.

The angle plates for connecting the buffer beam to the frames are noted on the drawing as 35mm x 35mm x 4mm but are actually drawn 1″ x 1″ angle. I could not source BMS angle 4mm thick and bought 25mm x 25mm x 5 mm. Just as well, as BMS angle is not actually square, so  I machined the angle plates down to 3/16″ thick to get them square.

The drag beam is similar except it bolts to the main frame and outside rear frame. The comments above apply here as well

In order to assmble the buffer beam and drag beam I used the mill table and two angle plates against which the main frams were clamped to be exactly 4 1/8″ apart.  The mill table provides a flat surface and the frames were mounted upside down with a 5/16″ rod under the step and this ensured the frames were exactly square. The buffer beam was clamped to the fixing angles with jewel lers clamps to be square and the fixing holes in the angle jig drilled using a hand drill from the frame holes and 4 BA screws used to bolt the buffer beam in place. Because of access being difficult to the back of the mill table the frames had to be turned around to repeat the jig drilling for the other side.

The drag beam was fixed in a similar fashion. This time the outside rear frames were removed so the angle plate for fixing the main frame could be jig drilled. Once that was done and the frame bolted in place the outside frame was reassmbled and its fixing angle jig drilled. Again the frames had to be turned around on the table to do the other side.

During assmbly of the drag beam the beam was checked with a square to ensure the whole assembly went together without twist or an offset which could easily have occured due to the bending process of the main frame and outside frame. Fortunately it all turned out OK apart from a slight bowing in the outside frames were the cut out for the cartezi axle boxes are mounted. This is due to the internal stresses being released from the cut out. 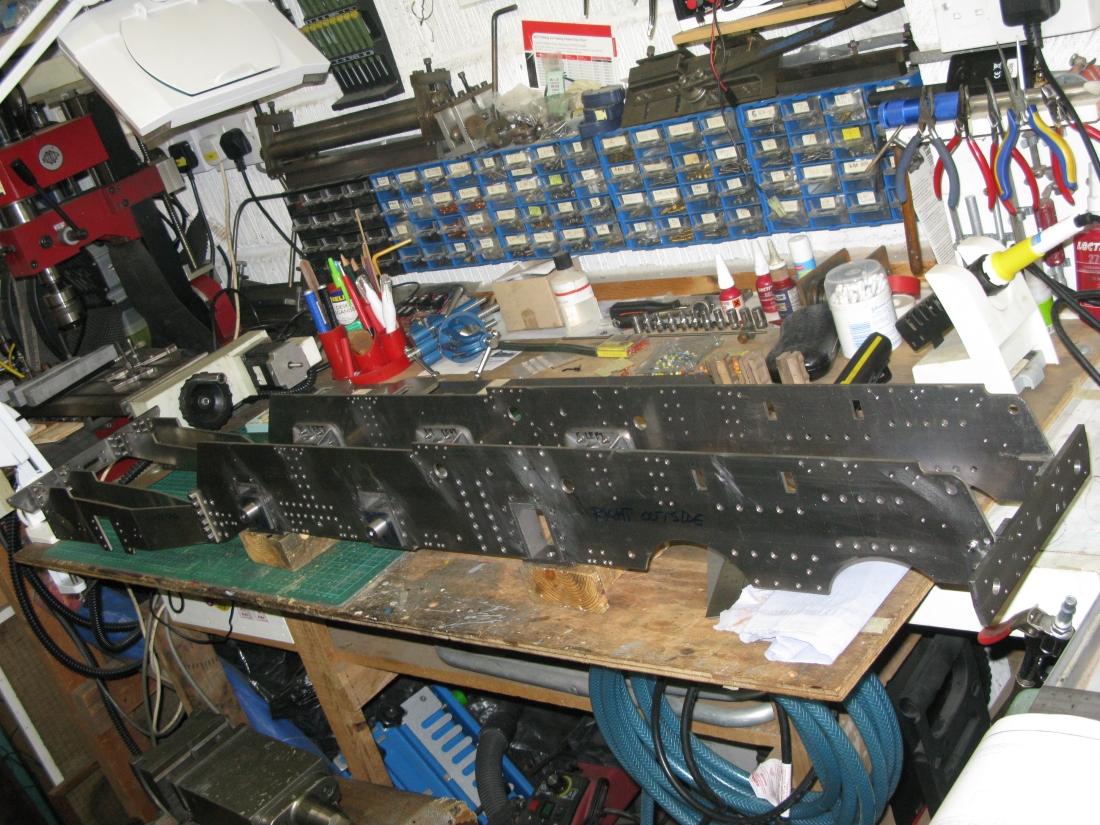 The frames with both buffer beam and drag beam

The drag box is a fabricated assembly concsisting of two triangular plates 1/4″ thick seperated by two 1/4″ thick blocks all silver soldered together. It bolts to the drag beam over the rectangular slot to accept the drag bar. The picture below shows it just before completion as it has yet to have the 1/4″ hole for the pin to be drilled.

The buffer blocks are turned from square stock. Peculiarly the drawing calls for 30 mm square why this should be a metric measurement is unknown. Anyway some square bar was machined down to this dimension and the block turned in the lathe. A relatively straight forward task that I need not descibe I’m sure.

The blocks are bolted in with 7 BA HH machine screws and nuts but also have  7/16″ x 32 nut on the rear that bolts the block firmly to the buffer beam.