This chapter is going to have all the odd and sods that are needed to complete the loco. Some of the items could have been added to other pages perhaps but it was easier just to have this chapter to wrap up all the bits.

The front buffers are turned from mild steel they are 1 7/16″ over all dia with a 7/16″ stock to fit into the housing with a 1/4″ rod screwed in to take the spring and retaining nut. The front of the buffer is radiused at 2 9/16″.

The initial turning down to size and drilling and tapping for the rod is straight forward. 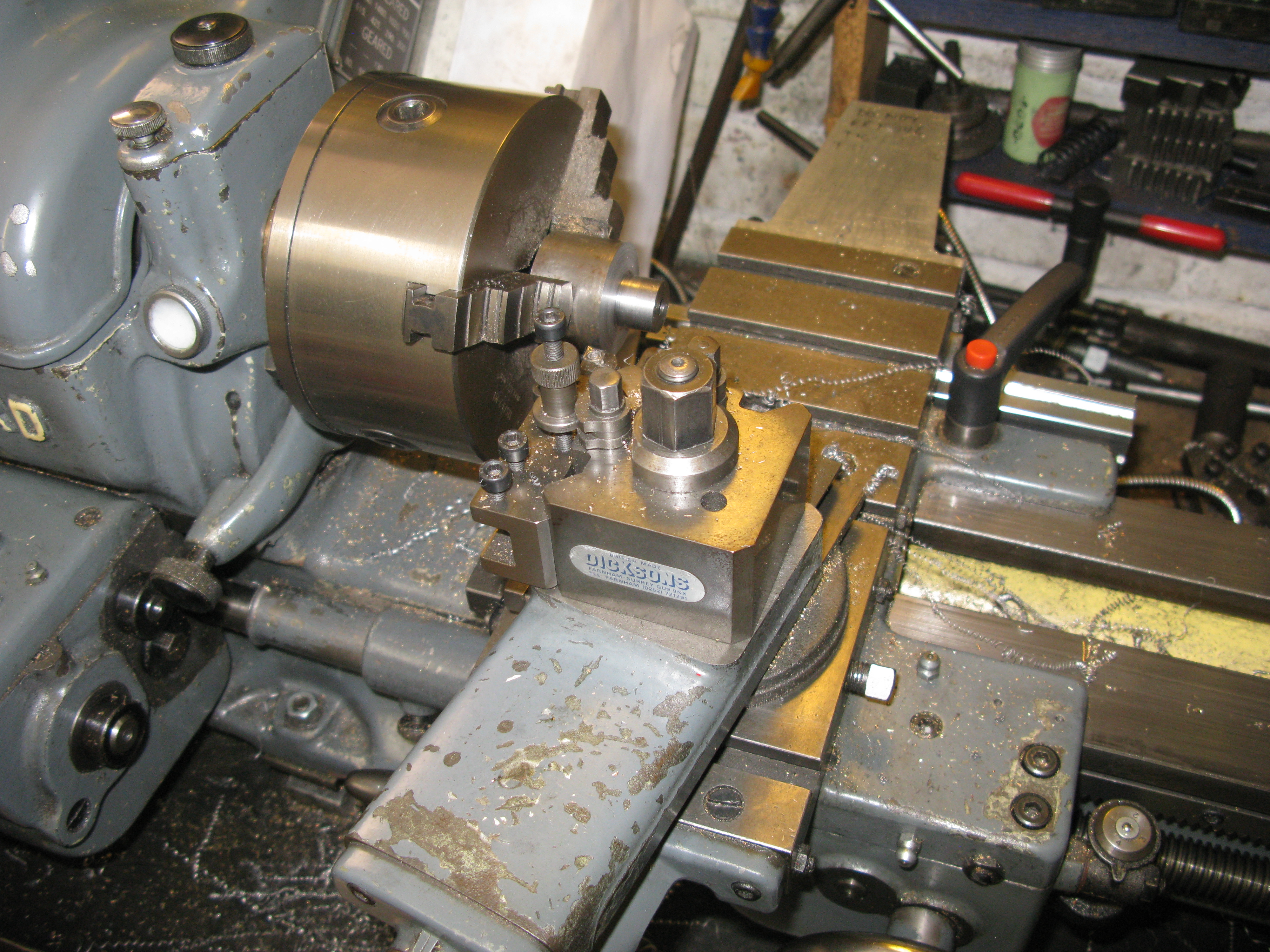 However the rear of the buffer has a 10 degree taper and the photo above shows it can just be turned in the myford with the top slide wound back as far as possible so the handles of the top slide and cross slide don’t clash. 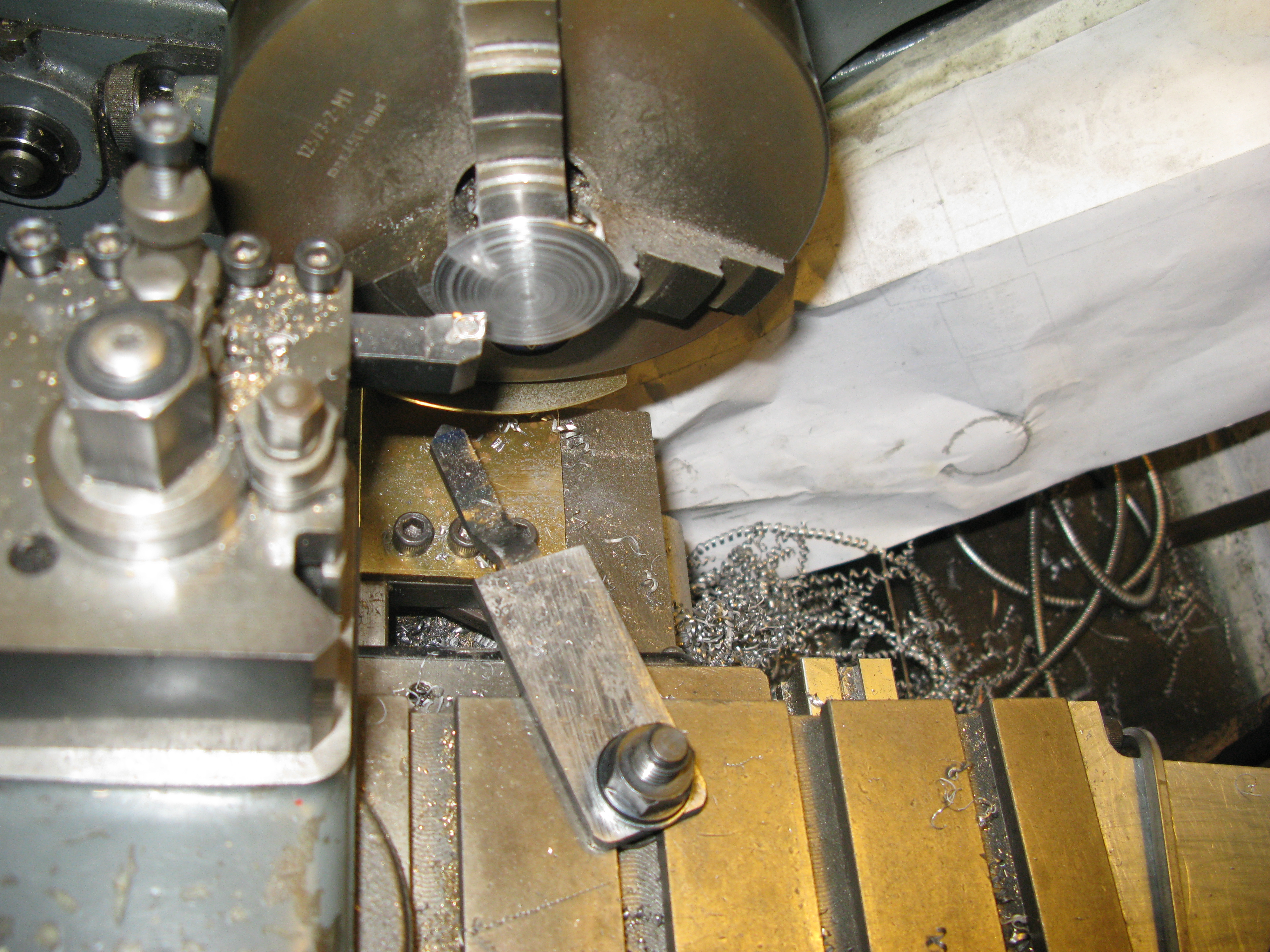 The tool tip and finger tip are vertically aligned (although the photo appears not to record that!) 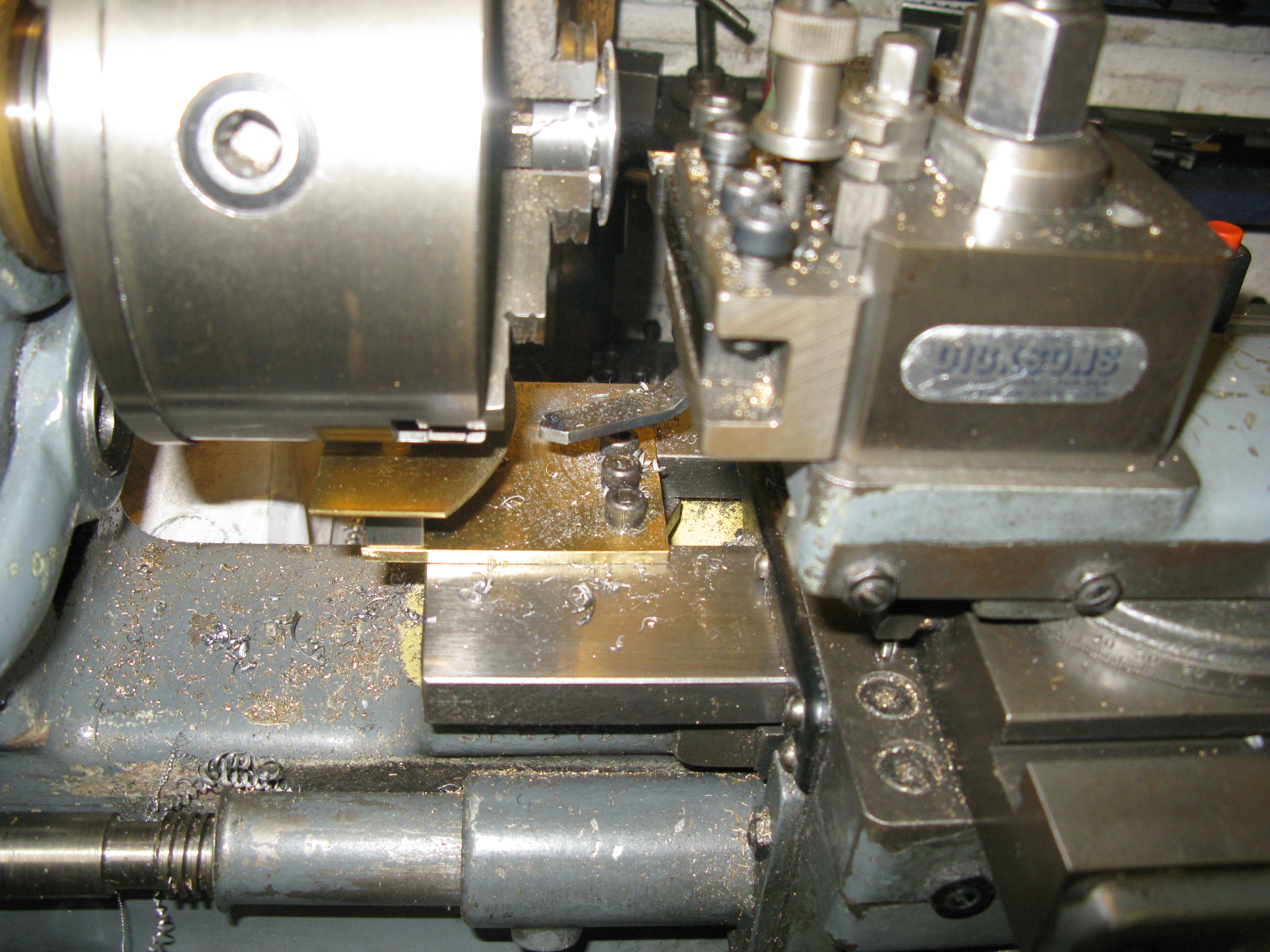 Now the reason for the apparant misalignment is clear as the finger and tool tip are not on the same lateral line. 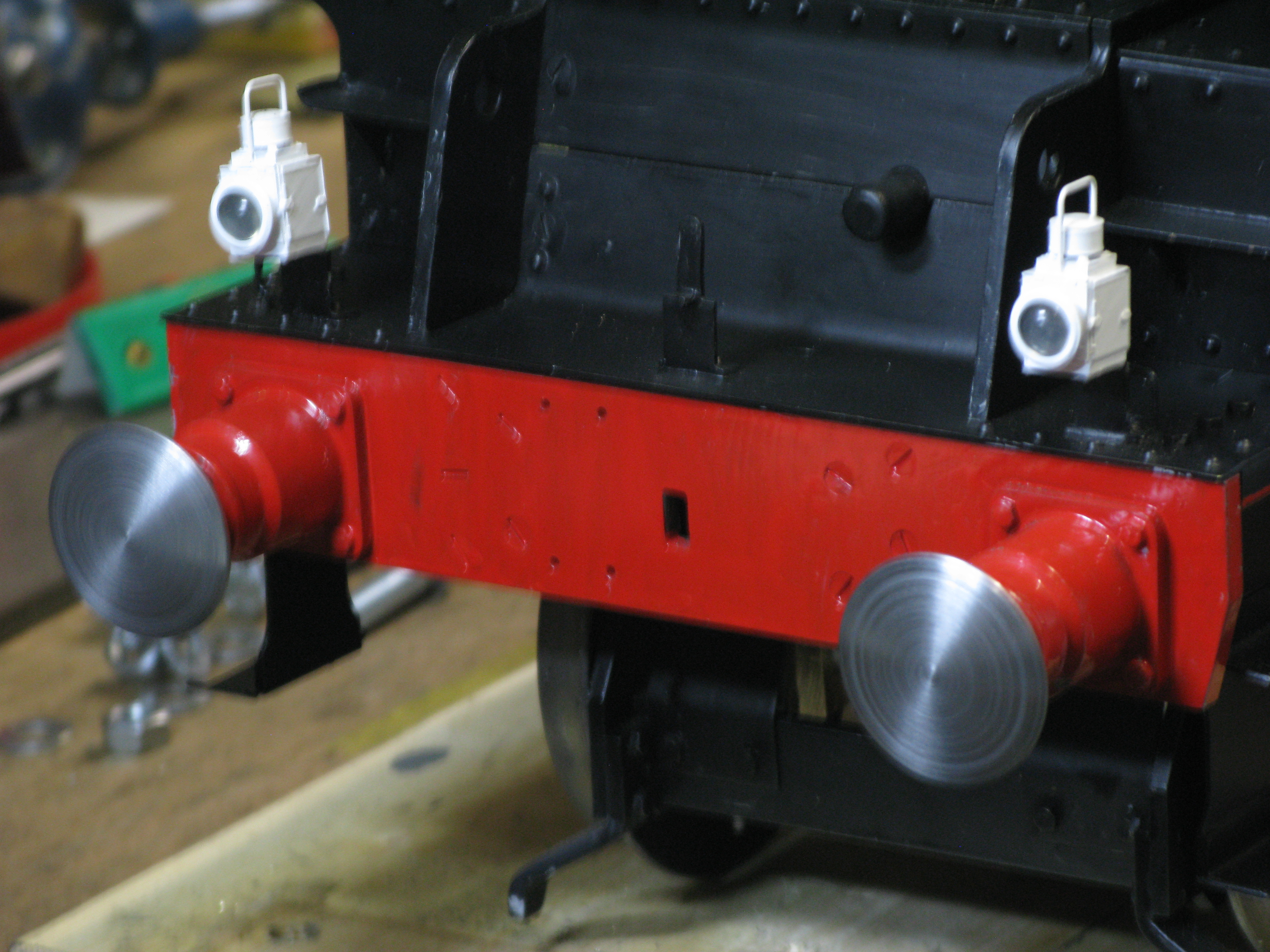 Fitted just below the oil lamps are electric lights powered from the steam driven electric supply dynamo. These are in an unpainted  brass case with a spherical clear lense giving a white light.

On the model I am fitting these made from 1/4″ square brass drilled from the rear to accept a 4 mm clear plastic sphere glued in position to jut out from the front through a 9/64″ hole. 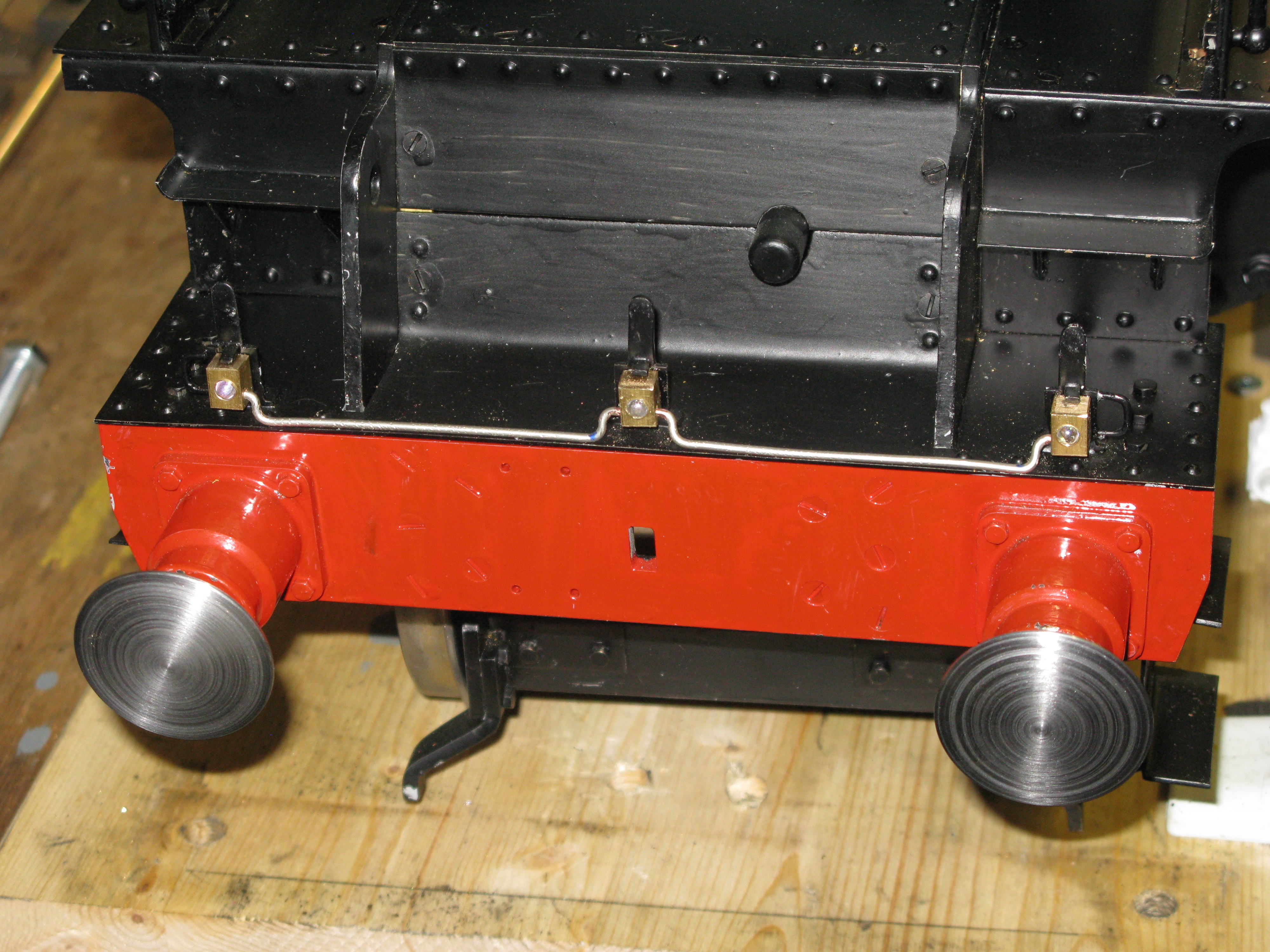 The lights are glued to the lamp irons. The unpainted copper wire joining the lamps is the electrical conduit and will be painted black. The left hand lamp will be similarly “connected” to the steam driven generator.

The steam driven generator is constructed from four main componants. The generator body made from 3/4″ copper pipe. The generator end cap from brass and the steam turbine at the other end also from brass but with six dummy bolt extensions and the base upon which it rests. 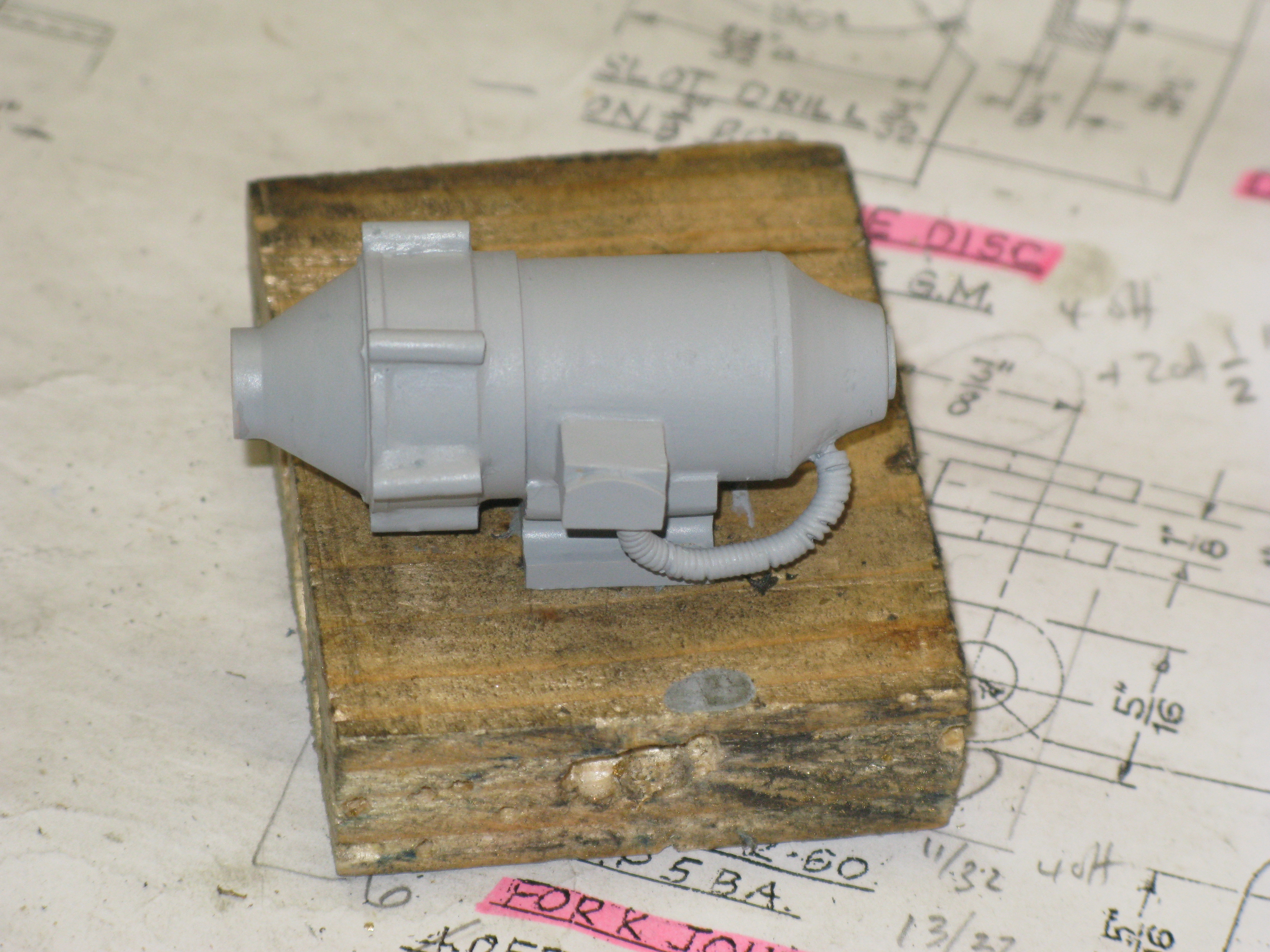 The dummy cable connection box is glued to the side and its flexible cable to the generator is a piece of copper wire with small copper wire wound around it. The assembly will be painted black.

The coupling bar is a CNC machining job as it it so much easier to get the round ends on the bar. 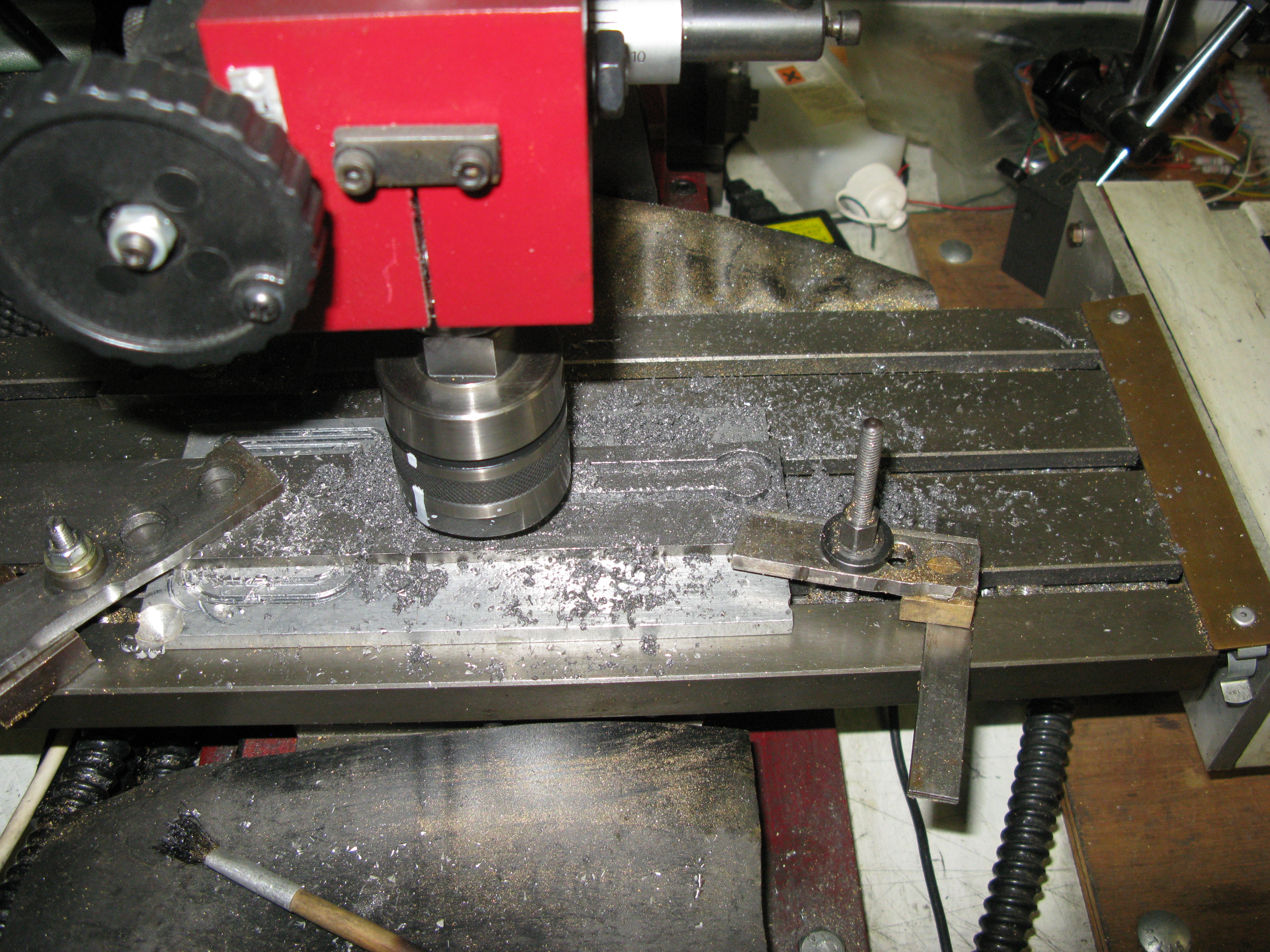 Just about visible in the swarf 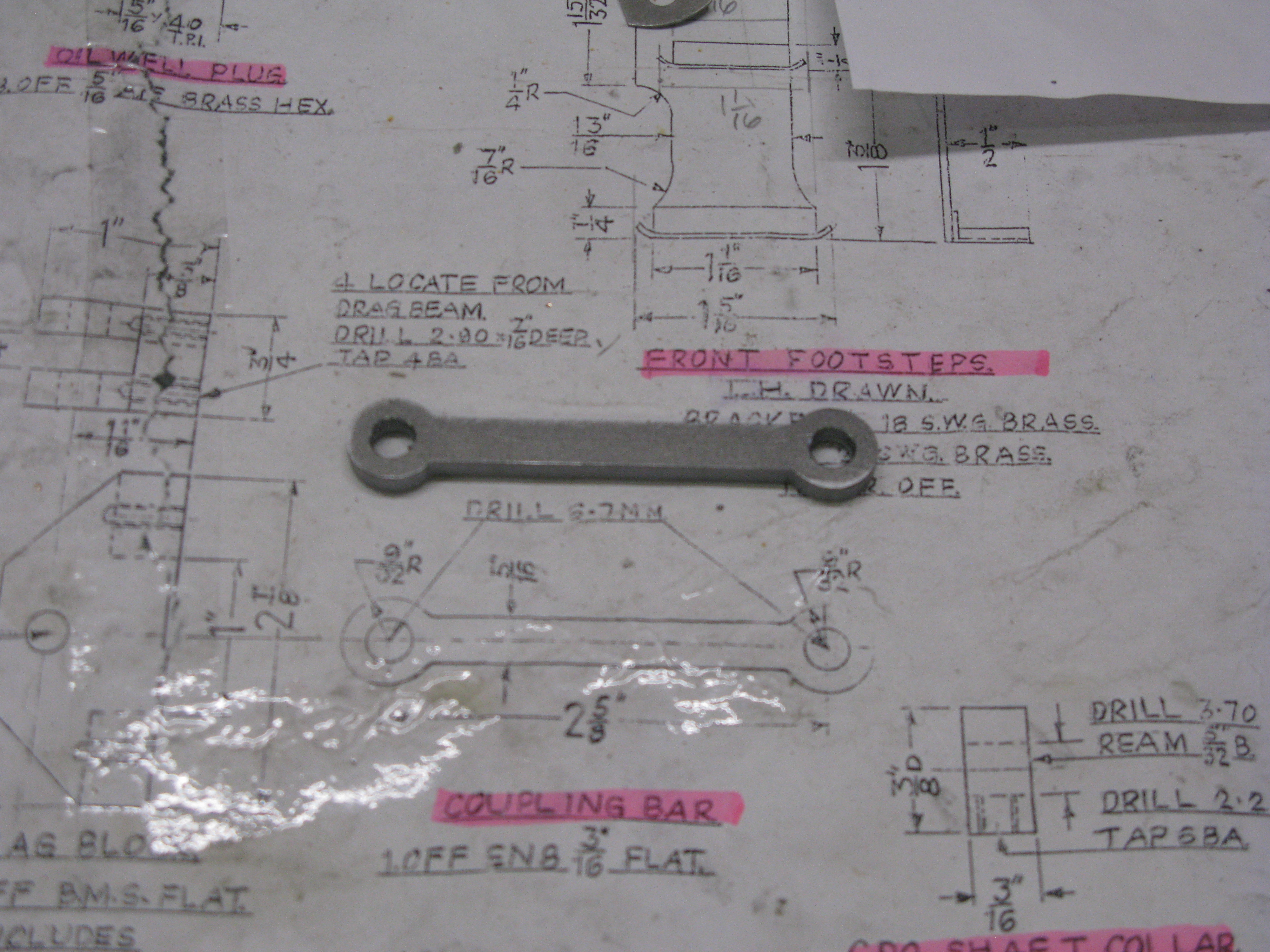 The vacuum standpipe on the front buffer beam is a mixture of favricated items and commercially bought castings.

The hose and its couplings and the swan neck are the commercial parts the rest fabricated. 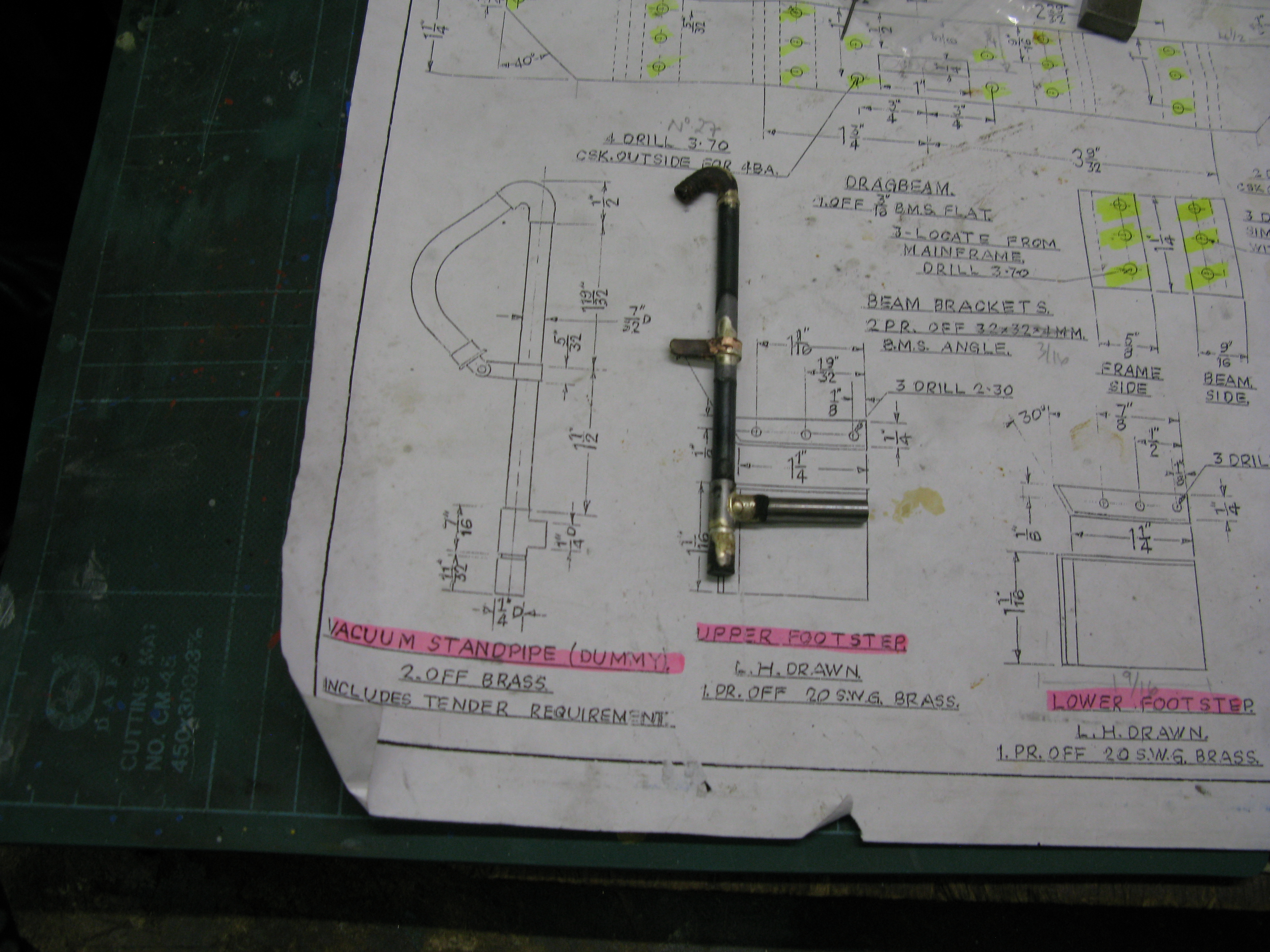 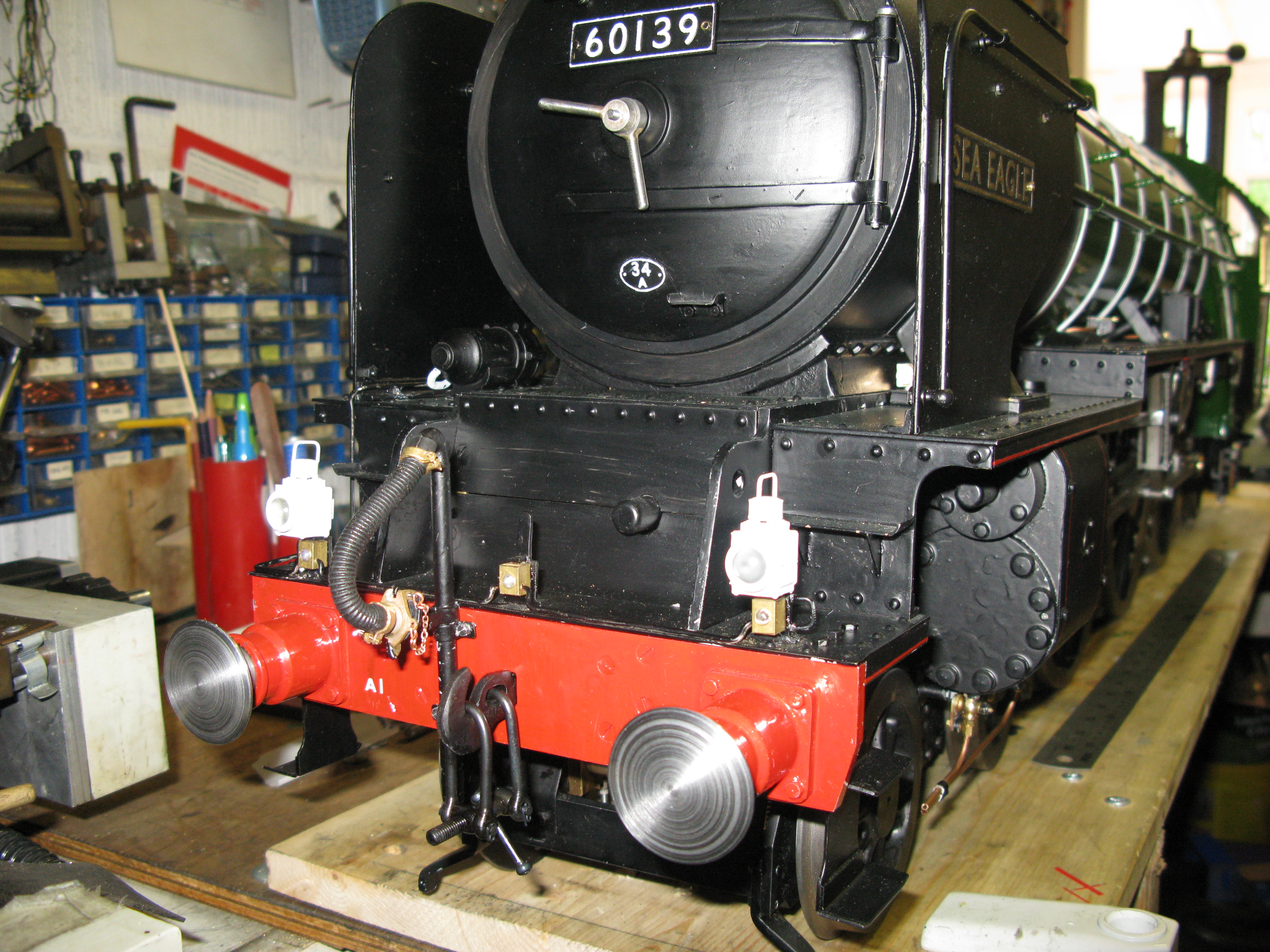 The coupling hook is a commercially bought item to LNER standard pattern. The lamps are also commercial items that I had. (they look more GWR than LNER, I’ll have to check).

The steam driven generator is fixed in place alongside the smoke deflector (just glued in position). I have decided not to fit the upper electric lamp and its conduit as it is a bit to vulnerable to damage.